Well, it's the last day of November.  According to my mental schedule, I should be at 20,000 words right now in my WIP.  I'll end the month at 18,000 which is 2,000 short.  Not bad, considering I'm dealing with my mom's illness, trying to find my dad a house so he can move here (and daily phone calls from both of them as well as a realtor), a puppy with severe food intolerance issues, and my husband had eye surgery today.  So I'm frazzled and it's nearly two pm and I haven't written a single word.  To hit the 18k mark, I only need to write 600 words today.  So that's my goal.  I can make up the rest next month or one of the months after.  I have three more months - December, January, and February to go.  Since I have to be at 80,000 (or 85,000) by March 1st, that's how I came up with the 20k per month goal.   I still say not bad with all I've been dealing with and including the cleaning, cooking, serving, cleaning up, and then decorating for Christmas that I've done last week.

On the exercise front, I've been nearly two weeks now without exercising.  That sucks.  I feel sluggish and fat and I've gained a pound or two over the Thanksgiving holidays.  So - no matter what - come Monday I am starting back to four days a week minimum at the gym.

That's my tale of woe for today.  At least I have a goal to focus on.

Now, I've been promising a sneak peak at some decorations.  Here's one picture of my tree and my mantle.  I'll post more in another post. 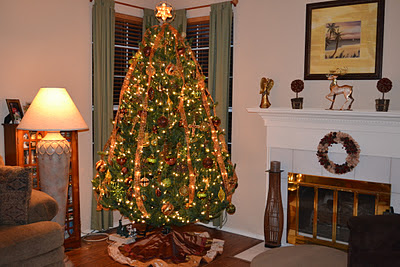 Posted by Karen Whiddon at 2:07 PM